Scroll to: The politics of incorporation — Examples of U.S. laws — Shareholder voting rights

The legal entity called a corporation (chartered company, société anonyme, Aktiengesellschaft) could and can be created only by the act of a sovereign power (i.e., a government). Today this basic fact is easy to overlook, since a company can now be incorporated via a simple application on a website. (Try a Google search for corporation company.) But behind every corporation stands a law, and without that legal foundation no corporation exists (in other words, it has no legal standing).

In the 19th century, corporations were created individually by special acts of legislation—as a rule, a specific act of legislation was required to establish each company. Or legislatures passed general incorporation laws, which permitted individuals to form a corporation by meeting the requirements spelled out in the law and filing the appropriate paperwork—in other words, via an administrative process, usually requiring the aid of an attorney. The acts that created a corporation (or spelled out administrative procedures for incorporating) simultaneously promoted and regulated the corporation by giving it privileges not accorded to individuals and also by setting restrictions on its actions.

For a sense of the complexity and details of corporate law in the U.S. in 1869, consult Abbott and Abbott, A General Digest of the Law of Corporations. The book comprises more than 1,000 pages and includes a list of legal cases running more than 100 pages. As the authors explain in their preface:

The steady extension, throughout the United States, of the policy of creating incorporated bodies, the magnitude of the enterprises conducted by them and of the interests intrusted to their charge, and the variety, intricacy and difficulty of the litigations to which their affairs give rise, seem to warrant the preparation of a DIGEST OF THE LAW OF CORPORATIONS.

THE POLITICS OF INCORPORATION

In the four countries that I explore in my research on the 19th century—France, Germany, the U.K., and the U.S.—the ease (or not) of incorporation, as well as the degree to which the law promoted or regulated corporations, varied a good deal. The number of corporations chartered and the degree of promotion and regulation seem mainly to have depended on the politics of the incorporation process. Where in the political structure the power to create corporations was lodged—at the national vs. the state/provincial level, in the hands of a legislature or a ministry—was a critical factor, perhaps the critical factor.

Corporate charters granted via special acts by the American state legislatures were published in each state's laws. Finding them is a laborious process and requires access to the published laws in libraries, though some are available on the web, e.g., Statutes at Large of South Carolina (1840) on Google Books. Charters granted under general incorporation laws, which set out an administrative process, are, as a rule, buried in state or county archives, if they have survived at all. Jump to Corporate charters data . . .

But, in a piecemeal fashion, many individual charters can be found as digitized documents on the web. One way to search for them is in the major document repositories (see Research Tools). A search of HathiTrust's catalog index for the keywords company+charter, for example, yields 642 hits. Included are a broad assortment of corporations, large and small, business (including foreign companies) and non-business (including municipalities). Here's a somewhat random sample:

Louisville and Portland Canal Company, incorporated by Kentucky in 1825.

Maryland and New-York Iron and Coal Company, incorporated by Maryland in 1838

Google Books and the Internet Archive also include many charters, though the relevant searches are more difficult.

An example of the kind of sources that have been particularly valuable for my research on shareholder voting rights is a set of documents in the Internet Archive for the South Carolina Railroad, 1827-1851. It includes the charter of the company, amendments to the charter, and the charters of its predecessor corporations.

The company's voting scale is shown in the image below. This graduated scale is an example of what, taking a cue from U.S. Treasury Secretary Alexander Hamilton, I call "prudent mean" voting rights. Describing an appropriate voting scale for the first Bank of the United States in 1790, Hamilton wrote:

A vote for each share renders a combination between a few principal stockholders, to monopolize the power and benefits of the bank, too easy. An equal vote to each stockholder, however great or small his interest in the institution, allows not that degree of weight to large stockholders which it is reasonable they should have, and which, perhaps, their security and that of the bank require. A prudent mean is to be preferred.

Prudent mean voting rights, in other words, sought a balance between the rights of capital and the rights of individuals in the governance of a corporation. 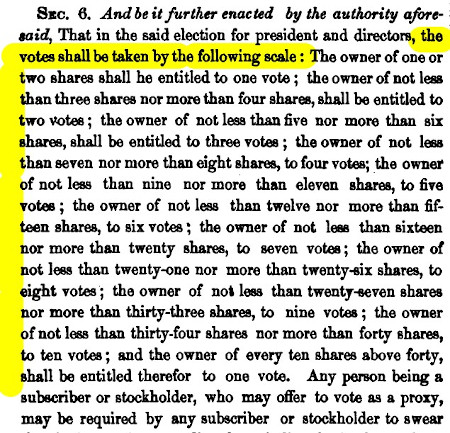